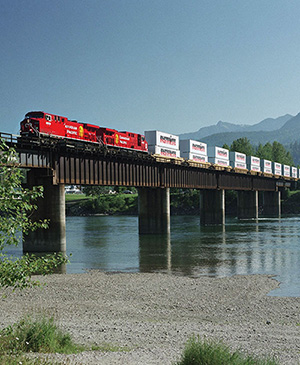 CFF is the largest privately owned repositioner of marine containers in Canada and does so exclusively on CP rail lines according to Ron Tepper CEO of Fastfrate.

“We believe this significant event will help CP secure more steamship line business as the mathematics require revenue on the return of the containers to the ports of origin, CFF use these containers to load LTL (less than truckload) freight from Toronto and from Montreal to all cities in western Canada on behalf of its 3,000 active clients,” said Tepper.

Fastfrate is co-located with CP intermodal terminals in most major cities across the country, and Fastfrate currently ship over 40,000 TEUs a year from east to west, the agreement anticipates 150,000 TEUs over the next three years.

“CFF is one of the oldest customer relationships CP has with the two companies first entering into agreement in 1966,” said Jonathan Wahba, CP Vice-President Sales and Marketing, Intermodal. “Fastfrate has a very strong name in the market for service, and the fact CFF trusts us with their requirements speaks to our ongoing commitment to serving our customers. We continue to develop and strengthen strategic partnerships with key customers like CFF as part of our disciplined approach to sustainable, profitable growth.”